For T1D, it’s a mixed blessing.

V had her follow-up appointment yesterday. Her A1C went from ridiculous 12.3 in May to perfect 7.2 now. That is great news. However, she is still in the honeymoon phase. After recovering from the shock and stress of high blood sugar, her pancreas is producing some insulin, so her insulin needs are very low. It is expected that within a few months to a year from initial diagnosis, the pancreas will eventually stop producing insulin because the body will finish killing off the remaining beta cell. As that happens, V’s insulin dosages will increase. Until then we are stuck in a limbo, not knowing when we will hit the floor, needing to make frequent changes to her regimen. On one hand, I supposed it’s not a bad thing at all that her body is making at least some insulin. On the other hand, stability would be nice. It’s getting rather annoying to be going up and down, to have a few good days, then to have spikes or lows, to have to speak with RNs and MDs often and tweak her dosages every few weeks. Also, no pump until honeymoon is over because it would put her at risk of dangerous lows. So while we are going to attend education appointments to get us ready for a pump, it is uncertain when V’s body will be ready for it. Until then we are stuck with multiple injections. At least the new system and the pens are so much easier than vials and syringes. 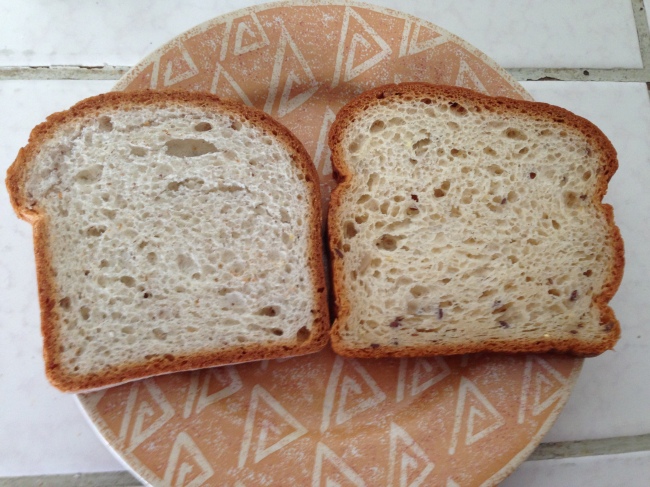 It’s been at least a couple of years since I’ve tried GF bread last. My memory of it was that it was very hard and practically inedible unless toasted. Definitely not something you could make sandwiches with. Therefore, it was with some reservation that I purchased GF breads for V to try. I had all but given up on making sandwiches for her, figuring that maybe we can do grilled cheese once in a while, or a breakfast toast, with a GF version. Boy, was I in for a surprise. The bread tastes pretty much like real bread! Udi’s and Rudi’s were the two most commonly found breads, so they were the first ones to go through our trial. We tried only multigrain breads for both brands, but there are other varieties available.

Taste: thumbs up for both! Rudi’s has a slightly sweeter taste to it and has a slightly more moist texture and flavor. I have a slight preference for Udi’s. However, my daughter says she likes them both equally and cannot pick a favorite.

Texture: both breads are soft enough to use for sandwiches. They are not as soft as regular gluten bread but are not hard or  crumbly. Udi’s feels a little drier; Rudi’s feels a little more moist or oily. Rudi’s also has more seeds in it.

Carb content: Udi’s wins the prize for lower carb count. Two slices of bread are only 22 g. In contrast, Rudi’s bread is 17 g. per each slice. If you make a sandwich with otherwise carb-free ingredients, you are looking at a 22g vs. 34g. sandwich – this can make a big difference in you meal planning and insulin dosage.

Accessibility: both breads are found at Sprouts and Trader Joe’s, and Rudi’s is sold at Costco. (As a side note, I found Udi’s hamburger and hot dog buns in Vons, much to my surprise.)

Price: Here is where Rudi’s wins the prize. It is sold at Costco as a two-pack for $6.99. The price of Udi’s single loaf at Trader Joe’s is $4.99. Nowadays, you would be hard-pressed to find a loaf of GF bread for under $4.

Bottom line: Udi’s or Rudi’s: hurray for good tasting GF bread! As I mentioned before, you can find GF hamburger and hot dog buns as well, and they taste very much like regular buns, only not as soft.

I can’t remember how I’ve heard about this restaurant before – maybe someone mentioned it, maybe I’ve read a review somewhere. I definitely passed by it often, as it is right in our neighborhood. Last weekend we were discussing where to go for dinner, wanting real home-made food and not some chain restaurant greasy, fatty, carby food. I checked Gluten Free in San Diego website and noticed that The Trails Eatery was on their list, so we decided to give it a try.

I am so happy we did! We came in right at 5 PM when the restaurant opened, so we were among the first customers that evening. They have a separate GF menu, though dinner menu is not included in this link. There were definitely plenty of choices, including salads and sandwiches.  It wasn’t busy yet and we didn’t feel bad taking up staff’s time with our questions. And we had lots. How big is a serving of this? Do you happen to know how many carbs are in that? What gluten-free bread do you use with sandwiches? The staff were very nice, answered questions and went back to check on the carb count for GF bread (they use Udi’s brand).

V decided to order turkey and bacon sandwich and mashed potatoes and really enjoyed her meal. The rest of us opted for gluten-filled food, including a humongous grilled cheese sandwich for my son and cajun chicken pasta for me and my hubby. Everything was delicious. At the end we split the GF chocolate flourless cake for dessert. You could not tell it was GF. Finger-licking-good!

Carb content for V’s meal: Sandwich = 22g, all from bread. Udi’s bread is really low on carbs, two slices are only 22g of carbs. Mashed potatoes = 30g, estimated. The serving was about 1 cup. We eyeballed it and sized it up using our collapsable measuring cups. The carb content for the cake was a pure guesstimate of 60g.

Bottom line: two thumbs up! Tasty GF options, fresh and home-made food, staff is knowledgeable about GF and understanding about diabetic needs, willing to answer questions and make accommodations. And it is a local business to boot. You should check out their GF breakfast menu, including pancakes! (I shall tell you a story of my first half-failed attempt to make GF pancakes in due time.) We are definitely coming back! 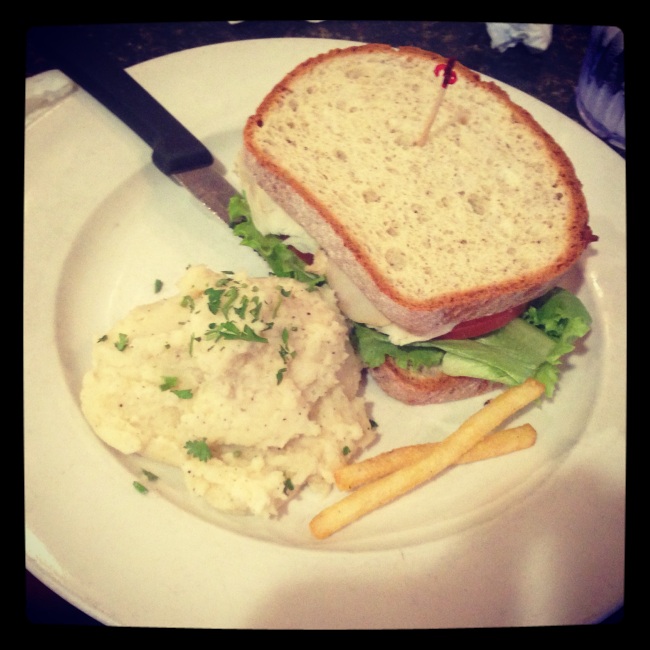 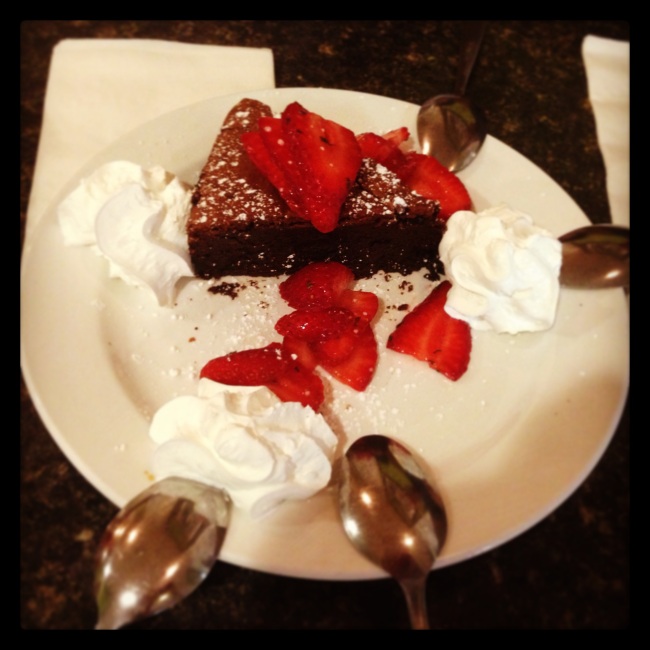 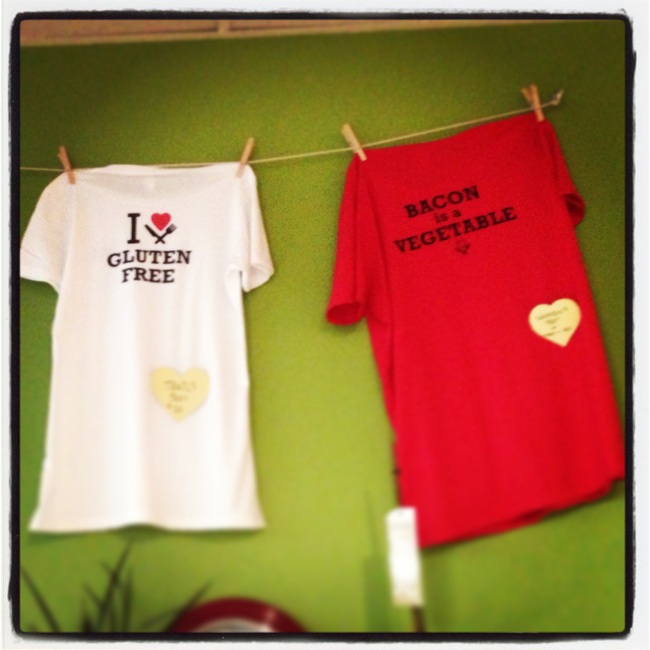 After another frustrating day of talking to the pharmacy and the doctor’s office, and realizing that the pharmacy staff were incompetent idiots and it was really their fault we were having problems filling the Rx, we finally got everything straightened out and started our new insulin routine today. We continue to do basal Lantus in the evening but no longer do NPH in the morning and just cover meals and snacks with Novolog using an insulin to carbs ratio. Today could not have been a better day to start this new plan! V woke up with a stomach ache and was not very hungry. Plus it was early because we were heading for our 5K. She ate just a little bit and thankfully we did not have to force 65 grams of carbs into her at breakfast. Before and after the race, we just made sure to check her blood sugar and keep her hydrated. And luckily they had sample-size Lara Bars at the start. Lara Bars are gluten-free and were a perfect pre-race snack for V. I did, of course, have other snacks in my fuel belt for her, since you can never assume there will be a gluten-free option available. V complete her first 5K – YAY – but complained of stomach ache all along and finally threw up in the car on the way back. She ended up eating a little for lunch and once again it was so nice to not have to force any carbs into her. By the time dinner rolled around, she seemed fully recovered and ready to have a normal meal. I think we under-estimated the carbs in her dinner a little, which is common when dining out, as her bedtime BG was a little high. But it was so freeing to have this flexibility. So far we all are liking this new plan a lot better, even if it means more injections during the day. Also, stay tuned for my first restaurant review – a nice little place in our neighborhood that offers delicious gluten-free options.